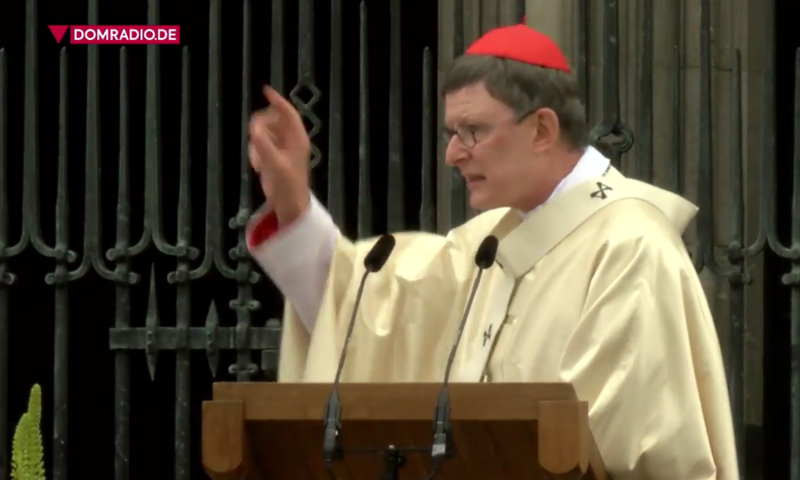 he Archbishop of Cologne, Rainer Maria Cardinal Woelki, has taken the opportunity presented by Corpus Christi celebrations to give a robust defence of his opposition to proposals by the German Bishops’ conference to admit the Protestant spouses of Catholics to Holy Communion.

In his short speech, delivered to a tightly packed congregation in Cologne Cathedral following the city’s traditional Corpus Christi procession, Cardinal Woelki set the stage for a renewed battle on the issue of mixed communion in strikingly forthright terms: “There has been much discussion about the Eucharist in recent weeks. Some people said ‘What is this all about? This is nonsense!’, others even said ‘This is a Punch and Judy show!’. I say – this is about life and death… This is fundamental! And that is why we have to fight and look for the right way. Not just any way, but the Lord’s way.”

Earlier in the day, the Cardinal had used his homily to highlight the importance of the Eucharist in reflecting and upholding the unity of the Church and its doctrines. Those wishing to receive the Eucharist should “consider well if they are able to say ‘yes and amen’” to Catholic doctrines such as prayer for the dead, the cult of the saints, and the “sacramental structure of the Church,” said the Cardinal, since “whoever receives the Eucharist is incorporated into Christ so that he becomes a member of His body and a member of the concrete Church as represented and composed by Pope and bishops.”

Cardinal Woelki’s speech echoed growing international criticism of an apparently inward-looking and complacent German Church, determined to maintain its privileged position in the face of shifting social attitudes by bowing to secular demands, as well as concerns regarding the implications of mixed communion in Germany for the rest of the Church.

“Once again, we in Germany do not live on an ‘Island of the blessed’, we are not a national Church,” the cardinal said. “We are part of the great Universal Church and all of our German dioceses are members of the global whole, united under the head, the Holy Father.”

Overall, Cardinal Woelki managed to strike a conciliatory tone, stressing that the members of the Church always need to be “with and for one another”. His remarks were greeted with applause from the faithful in the cathedral, however they are unlikely to win him allies amongst his fellow German bishops or in Rome.

The controversy comes amidst increasing public pressure regarding his choice of Vicar General, parish mergers, and a financial scandal in Bonn. Comparisons have been drawn – both positive and negative – with the outspoken Joachim Cardinal Meisner, his predecessor as Archbishop and one of the signatories to the “Dubia” on the interpretation of Amoris Laetitia.